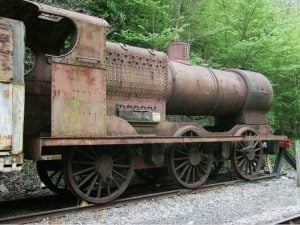 44123 was constructed at Crewe in August 1925 and sent to Willesden shed in London when new. The locomotive moved several times in the next 25 years until settling at Barnwood, Gloucester in September 1950 for most of the remainder of its life. As a Gloucester engine 44123 (as she had now become) was a regular visitor to the Bristol and Bath area, and would have passed through Bitton station many times during its working life. The end came for the engine in June 1965 when it was condemned and sold to Woodham Brothers in September of that year. There it was to languish until December 1981 when it was moved to the Mid Hants Railway, moving again five years later to Bitton, arriving on Tuesday 20 May 1986. Since its arrival restoration of the engine has progressed well.

The locomotive has remained virtually intact whilst those working on it rebuild platework and replace fittings and parts. Some of the work carried out so far includes a new cab, footplate and dragbox, boiler cladding and brake gear, whilst a collection of spare parts have also been made or purchased. Work is also taking place on the tender, with the intention of fabrication a new top half to be united with the restored chassis.